Last of the french & End of Year Musings

Around December 6th I had talked a random family member into ordering me some more Crusader french.   Ordered on December 6th, it got here(to Canada) in only 8 business days.  I had ordered  another pack of Rifle grenadiers, infantry w/ carbines  and Commanders(to round out my Platoon commands), as well as 1 each of 60mm mortar, 81mm mortar, and Hotchkiss HMG.(and a German 80mm mortar, but he'll get treatment later) 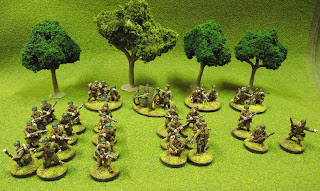 Crusader French painted & based on 26 hours
Well due to Christmas/preparations and a few other sidetracking occurrences I finally go to work on them Tuesday night around 10pm. I had trouble getting tired tueday night so I was up until 6, painting on and off.  I Woke up around 9, went out on errands until 2 and then painted off and on again until 10, when i finished all 32  french. they were all based by midnight.  Total turn around time stat-to-finish , 26 hours(actual time probably around 8-9 hours).

You May have noticed that that gun isn't Crusader(but the crew are). In fact I have no clue what manufacturer it is. Dave Hoyt gave the gun to me, as he had cannibalized the crew for something else. The 2 kneeling crew members are the 2 remaining VB grenadiers I had(sans rifle), with an Irate officer(he is pointing his pistol at one of their heads!). 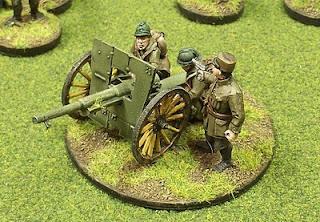 You may have also noticed the quality of the pictures has suddenly gone up.  I got a new 12.2 megapixel camera(with super-macro!) for Christmas.  I also got the Black Powder Rules, along with 2 Hourtouille Napoleonic books (Wagram and Borodino).  I've been interested in trying black powder for a while, so this is a great gift, especially since I never seem to spend much money on rules.


As seems to tradition  with Miniatures blogger, i feel the need to sum up the year.  DEspite being unemployed for jsut over a year now, I've managed to stay pretty  busy. I  built a heck of a lot of terrain this year, which along with painting commissions was the main reason  I have been able to start into my World war 2 project. I built a lot of fields,  rock outcroppings, the Indian village, 6 2x4 terrain boards, and numerous hedges, walls, and fences. I also finished a lot of pre-made terrain, including  10 Pegasus Russian houses, 1 Pasticville log cabin, 30 Lionel telephone posts,  and several small pieces from Acheson Designs.


For WW2 I finished off my 204 infantry(including crews) 18 crewed weapons(just the weapons),  15 tanks, and scratch built 70% of a French truck(waiting until I can afford to have the wheels rapid prototyped to finish) in almost exactly 3.5 months.  Before that I painted nearly my entire collection of French and Indian wars figures(200 figures in it's own right). In between I painted all sorts of things, including some Napoleonic Dragoons, ECW dragoons, ECW infantry,  Renaissance Polish, and lots of 40k(mostly on commission).

Fore the new year, it looks like i might be starting into an 18th century Imagination project with Dave Hoyt and a few others  we will be likely using out preferred Horse & musket skirmish rules, Sharp Practice.  I'll be doing the Electorate of Lustigzollern - Großgesaß.  Which of course is ruled by Kurfurst Friedhelm Ivo Großgesaß.  I have done up an initial concept for the uniforms of the Kurfurst Regiment. I think I may change the pants to  the yellow.  the Kurprinz regiment will be yellow with baby blue facings.