The week before Fallin(3 weeks ago) I asked Fellow MIGS member and Gamer Larry McGee if he could pick me up a box GF9 econobases while he was at Fall In!. he agreed and I gave him the money to cover the box.

Last Friday(nov 5th), Larry Showed up at the club with my GF9 bases. But he also had 2 BTD soviet ATR teams and a Maxim team firing!  Given how difficult it is these day to get reliable service from BTD, this was a boon for my Russians!  I paid $15 for the 3 teams(7 figures and the Maxim).  I painted them Saturday night, but Failed to post  them here because i was laid up Monday-Wednesday with serious Allergy issues, and then frantically tried to get my remaining projects for the week done to stay on track. 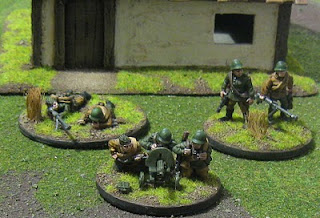 Last night our new friend Mark came down from Cambridge(1 hr drive) and braved some of the thickest fog I can remember, to play another game of disposable heroes WW2 With Jon and I.  We played an eastern front scenario, in which a surrounded soviet platoon with armoured support attempted to break through a rear area German garrison(with a bit of help from a Pzkmpfw IIIJ en route for the front lines).  the Russians has 4 infantry squads, a platoon command, a commissar, a Maxim team, an ATR team, an 80mm Mortar, 2 T34As, a T26( 2 Mg turrets) and a T35. the germans had 2 infantry squads, a Platoon command, an HMG team, 2 5cm mortar teams, a PaK 38, a 75mm IG18, 1 pzkmpfw. Ib, 1 Pzkmpfw IIc, and a Pzkmpfw. IIj. The soviet objective was to get at least 1 unit off for a marginal victory  and 3 units off for a major victory.
In the first turn Mark's T-34 took out the Pz II on hte left flank.  the Russians  put up a line of smoke to cover teh advance, and my PaK 38 repositioned to cover the flank 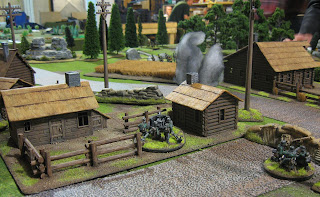 the smoke limited the fighting to small bursts of gun fire until the 3rd turn when the smoke cleared half the Russian infantry concentrated fire on the PaK, 38 taking it out in time to save the T35 looming up the road. 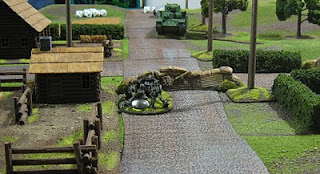 THe HMG started to move from hte central road to hte right flank to catch the soviet infantry appearing on hte edge of the woods.  after a well placed shot at the infantry, hte gun was flanked and killed by a soviet LMG team. the Pz III went to the right flank, and shot up some infantry. once they were out of sight in the woods(and unable to Assault)  the German commander(me) brought the tank out and took out the T-34 with a well placed as it was cresting the bridge. 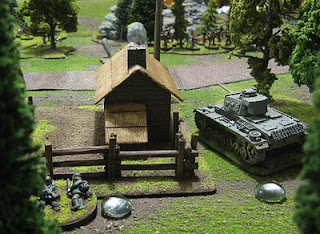 Despite the stiff resistance of the Germans, the soviets got a T-34 off the table, winning a marginal victory. In hindsight, if i had moved my infantry squad on that flank a turn sooner I might have been able to assault and immobilize the T-34. but even as such, i only lost 4 German infantry, An HMG team, a PaK-38 crew, and a Pz II  not bad given the initial odds. 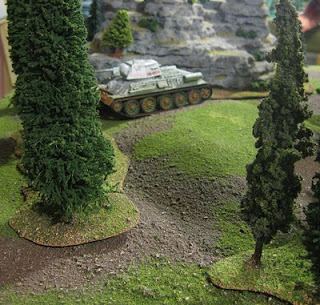 IF you look carefully at the pictures you can see some Lionel O-scale  telephone poles. i was workin on these this week.  i have 30 of them, 20 of which are a commission for another fellow wargamer, Ron Peraziana. these really make a table look Fantastic in my opinion. they are cheap too. $11 for 10.

Stay tuned for more soon.
Posted by Stephen Thomson at 9:46 AM