I've decided to paint up a platoon of  early Germans to fight my Russians.  I always try to do 2 sides of any project, just to make sure if someone disappears I'm not left with only 1 side of a war.  Ive been burned by people before, and i decided then I would not let it happen again.

I've inherited some extra Bolt Action/Warlord and and crusader early German leftovers from my friend and gaming colleague  Dave Hoyt .   I also picked up the 50mm mortars on a recent trip to London, Ontario. so yesterday i decided to paint them up.  So far i only have enough for a  1 squad a platoon command, and 2 50mm mortar teams.  but i should soon have in the mail  enough Crusader Germans to round my meager force out to 3 full squads, a platoon command, a Recon squad, , 2 50mm mortars and an HMG team. 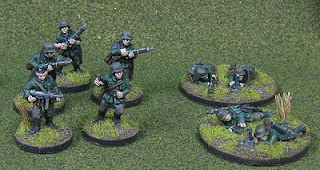 Also last Friday,  while in London, I picked up  an Black Tree Designs Russian Maxim team from Imperial Hobbies. Sadly, this was the only Russian support team he had.  He did have a ton of regular BTD Russian riflemen, a few packs of SMGs and 1 or 2 each of Officers and character packs. BTD are hard to find these days, mostly because they withdrew from retail distribution, and then became unreliable with filling orders.  this is unfortunate, because I think they have the most complete WW2 Russian line out there.

Russian scout squad and Maxim HMG team
by Black Tree Designs
So Saturday I painted the Maxim, and a couple of russian scouts I had kicking around. the scouts are in the camo smock so i decided to do them in the autumn amoeba camo scheme. 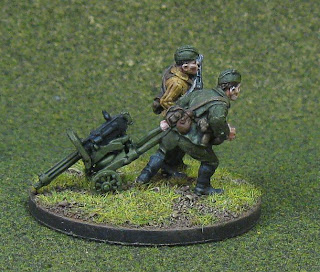 Closeup of Maxim team from the other side
I'm still looking for Black Tree Designs Russian support teams. I'm looking fro pretty much everything but 76.2mm AT guns.  if you have any you'd part with, Drop me an email at crucible_orc AT sympatico DOT ca. I have various 28mm Warzone (Sci fi)Epic 2nd ed Eldar vehicles, and a few other items kicking around to trade.
Posted by Stephen Thomson at 1:08 PM