Over the Christmas break I finally got the Spanish church finished. I had ordered and received the Renedra gravestones from J&M miniatures by the end of October, but due to school I didn't really get a chance to add them to the church yard until Christmas eve. Christmas night I managed to get the texturing and painting all done. I thought it was rather poetic to be building a model church over Christmas. the base is about 24" long and about 15" wide at the cemetery portion. the bell tower is 12" high. the tower is 2 pieces above the main level. and the roof of the church is removable.

anyway, over the weekend I had a few friends over, and we decided to have a game of Disposable heroes.   I decided  to pull out the completed Spanish buildings(i still have 2 more bases under construction). the excuse we came up with to allow the Spanish buildings was that German volunteers in the Spanish civil war were actually positioning along the french border for a secret  attack, and the french caught wind and launched a preemptive strike into a small Spanish border village to stop them. 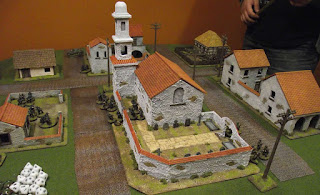 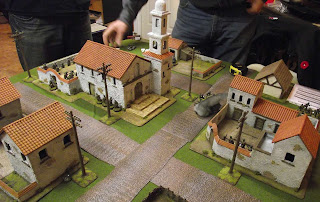 we jsut through down an old green GW game mat some roads telephone poles and the buildings, and played. the game ended in a tie, leaning slightly towards the french.


This semester looks like it's going to be merely busy as opposed to the usual frenetic frenzy we have become accustomed to, so I'll probably be posting a little more often. although over the next week or so I'll be packing and moving into my grandfather's old house. I hate moving, but I'll have a decent basement that I should be able to set up a bigger gaming table in.