So It's been quite a while since I posted anything on my blogs. after moving out here i found it hard to game.  I worked evening(2:30pm -11:00pm) and all the local gaming(that I find interesting) was happening  on either Tuesday or Wednesday nights.   I wasn't painting because i lacked the motivation of regular gaming sessions.

last October I decided to start collecting some Necromunda stuff, and that got me back into small batch painting.  i wasn't seriously painting and it often took me a month to finish 10 figures.

in April I was approached by a (very)local gamer, Jonathan who was in the same predicament as i was.  he was no longer available to game on weeknights.  We set out to organize a small group to meet in St Albert once a Month, on a weekend.  we had our first meeting on the last weekend in April.  We played a game of muskets and tomahawk using my Imaginations(The Electorate vs Polhynov) and some army lists and rules amendments I had fleshed out before leaving Ontario.

i realized the week before that i had no skirmishers  and very few cavalry for the Polhynov forces so i painted another 8 heavy cavalry and 16 skirmishers before the game:


the cavalry annihilated each other (sadly no pics) and the infantry did much the same. but the  Electorate forces were the first to start falling back so we called it in favor of the Polhynov forces. 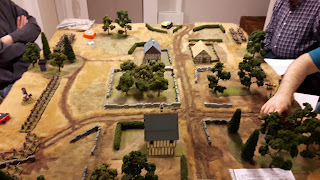 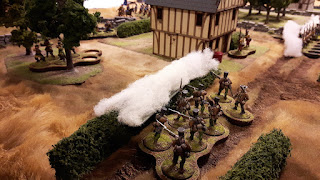 The game was quite successful.  the rules amendments worked and the the generic"Imaginations" armylist I developed for more European style combat(including more useful cavalry) seemed to work out quite well.


i also committed to running a big Battle of Kulm refight ( done a few years ago at Hotlead) on my new 12x5" mat  that i documented on the blog last year. I decided i would paint up the previously missing Prussian forces for the game.  That post will be coming in a few days.