I mentioned tehre would be more napeolonic game pics, so here tehy are.

These are from 2 games in November/December in which I introduced 28mm Napoleonic wargaming to a couple of Gamers from the local game store.

The first game was played in my basement with Fred, a local proponent of Historical Gaming at Black Knight Games.

The game was a bit smaller then normal due to the limited size of my basement table, 4"x8"

the game was a close fight. but the Russians eventually won.  I unfortunately don't remember a great deal more. most of the pics are of the setup, as after that i was caught up in the game. as per usual a forgot to take pics after that.


the second game was roughly a month later.  We played up at Black Knight Games. there were 6 players once everyone showed up.  By that time Fred had finished a brigade(!!!) of highlanders from Victrix, so I replaced a Russian brigade with them so he could use his new shiny figures.

We used terrain boards from Black Knight and I bought along all the other stuff.  Black Knight has an Excellent selection for a store, but it's  predominantly focused on Sci-fi and fantasy terrain because that is their bread and butter.

I'm a perfectionist regarding terrain so I just can't have Warhammer Fantasy-style buildings for my napoleonic games. It would seriously drive me nuts.  I don't judge other people based on their on their choice or quality of  miniatures or terrain, , but if I run a game, I want it too look good(to me).  That's just part of MY miniature hobby.


The pivotal areas of combat were the middle and left flank. on hte left,  Fred launched his highlanders in wave after wave of attacks at Dan's  French line.  unfortunately the french weathered the attacks and eventually broke most of teh highland brigade.

In the centre  Jon's french line and Legere loosed several devastating close range volleys upon Matt's assaulting Russians. the combat sea-sawed back and forth  but the french managed to get the smallest of advantages.  on the right flank, the Russians were outmaneuvering the Baden infantry. immediately to the right of them the french/allied cavalry looked to have the advantage over Russian cavalry, but eventually the heroic Lithuanian Uhlans won the day.

It was a good close game and everyone seemed to enjoy it.   The rules (based on field of Battle) are a little unorthodox for  new historical gamers, but  they are relatively easy to learn and flow nicely.

The last year has been a very busy time for me.

Starting in November busy meant starting renovations.  We are selling our house and moving out west.  I've done msot of teh major renovations my self.  I refinished 2 bathrooms,  refinished the 3 season portch, put a new backs plash and counter top in the kitchen,  and sanded/filled several of the old plaster walls that were not well finished.  we also repainted every room in the house.  I also did a bunch of electrical work.

since last may I've not played many games.   between may and november there were almost none,  and between November and March there might have been 6 games.

anyway, while I was going through my camera SD card, i noticed about 3 or 4 sets of pictures. Over the next few days I'll be sorting tehm and posting pics.  There probably won't be much AAR as i don't have much memory of a few of these games.

These pics were taken by Fellow gamer Mike at the end of April at a napoleonic game i put at at Martin's house.  the game was conspicuous because the allies(Austria and Russia) almost didn't get out of their deployment zone before the french made it to them.  but in the end, the allies almost came back to win. Almost.  Their army Morale didn't quite hold, and when it look liked the french army would shatter and run, the allies did instead.  it was a hell of a close and bloody battle though.

and now, the pics 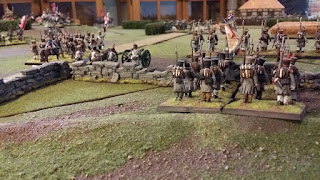 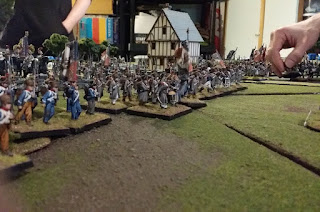 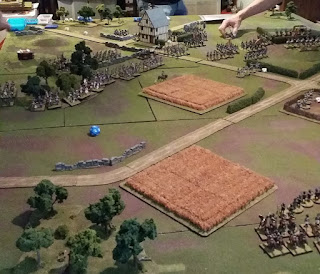 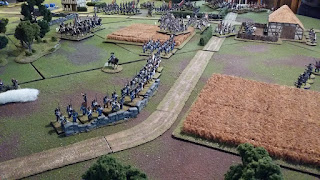 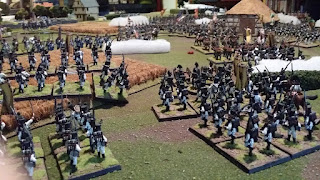 this battle also featured some stellar closing fire by the Austrain and Russian lagers.  in no less tehn 2 cases, a unit was broken by their fire.  in one, a French heavy cavalry charge was leveled by a close range Austrian Jager rifle volley.  the Austrian jagers were definitely teh msot devastating unit in this game, the broke or routed 3 units with fire.
Posted by Stephen Thomson at 12:53 PM 2 comments:

last Friday I was invited to Muskets and Tomahawks at a friends house.  So I packed up my Indians and rules and headed out.

We arrived just ahead of the crowd(there ended up being 8 of us), and Craig (the host) had set up a wonderful looking table.  He included a log cabin settlement at one end of the table, and a  Indian village(which you may recognize) at the other end.  Taking both the settlement and the Indian village were the french Main objectives.  the British had to keep them.


No one had played the game yet, but several of us had the rules handy.  Dan and I had read them thoroughly. Fortunately the mechanics are fairly simple.


Before we deployed our troops, we all rolled a side plot in secret. by pure coincidence, 2 of the french chose Dan's provincials as the target/source of their side plot.  then Dan deployed right in the middle of the table. as a result the game sort of revolved around Dan's provincials.

I had gleaned early on that my Indians had no chance crossing open ground against Jordan's grenadiers to get to my objective beyond, so I helped kill Dan faster so I could then get Mike's line units to help me.
However in a rather ironic turn of events, my Indians Charged and killed Dan's officer(Colonel Washington figure), not knowing that  doing so kept the other 2 players from completing their side plots.  which is fine because by the time we finished going after the provincials, neither of the remaining regular french infantry at hand  had enough strength left to oppose the British regulars in town.  so i didn't get my objective either.

In the end 2 French players were wiped out along with 2 British players.  the remaining french converged on the Indian village and took it after some fierce fighting by the defenders. we called it a tie since both sides occupied one objective.


Overall the system was fun.  I did find that musket fire is ridiculously deadly. Especially when coming from a firing line. Two suggestions made were to drop the lethality of muskets, carbines and pistols to 4+ instead of 3+. Not a huge change, but potentially enough.  It would also have the side effect of making artillery slightly more potent. which might not be a bad thing because the general consensus from the net is that artillery looks pretty but is kind of useless most of the time.  We were also thinking, that for our games, we might remove the rolling for additional casualties on a recoil. For irregulars and Indians this would keep them from evaporating after a single volley most of the time.

Dan and I are going to try this set of rules out with our imaginations. So we'll see how that goes.