So over they weekend i got on the painting of my french gun team, which as pictured earlier, has a limber team and caisson team.  this is for my somewhat-sidelined peninsular war skirmish project, using Sharp practice.  this is the first Item I've done for it, and it's also the first time I've used tufts for basing.

The front rank  artillery equipment is really fantastic .  The horse teams even come with bendable wire to attach the horses to the limber. the wire is unfortauntely un textured, so I painted the rope texture on. 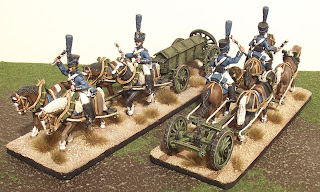 It's also the first time I've tried a more arid basing scheme, including the first attempt at using tufts.  it turned out ok, although i couldn't use as many tufts as i wanted. it gets expensive.
Posted by Stephen Thomson at 11:33 AM 6 comments:

one of teh guys in my napoleonic gaming group was over a few weeks ago, and i was showing him some stuff, including a tray of Micro Armor USMC vehicles.

a few days later he inquired about buying them a few days alter, and we agreed on a price.  then we scheduled a game for this evening. so i pulled out some of my soviet forces, set up a 4x4 table(much too small) and tossed some dice around.

we used a system my friend(who just graduated from the Royal military college of Canada as an armoured lieutenant) wrote 4 years ago. he called it fireteam, and it is a 1:1 scale battalion level game. it combines the best elements of Sharp Practice, Piquet Field of Battle, and a an earlier attempt at a micro armour set of rules.  it is a card driven system, with cards like Piquet:FoB(move all, move one command group, fire cards) but  used more in a Sharp Practice-like manner( both side's cards are combined in one deck, and played in the order they are drawn. the turn ends when the 2nd "fire all card" is drawn)  the deck, along with the single combat chart that he developed for all the weapon mechanics( 14 columns, 10 rows, not too complicated) make for a system with some Fog of war but not so much that you pull your hair out(IMHO).

the rules are 12 pages long, and about 1/3rd of that is detailing the artillery and air strike rules. the author and his brother used their ongoing military training to tweak the rules to be both fun and moderately realistic.


anyways, the game is optimal for a 4x8 or 6x8(or longer) table, so a 4x4 was a complete bloodbath. we played one turn and the game was over. my opponent was a little apprehensive about the card system but really warmed up to it once he shredded my soviets.  it also doesn't help that i haven't pleyed it in a few years, and did a poor job of balancing the forces.  now doubt those Capitalist  pig-dogs will get their come-uppence next time !

Selling the marines was a good idea, because now i have someone to play against!  and maybe I'll one day paint up my larger German force.
Posted by Stephen Thomson at 10:17 PM 3 comments:

I got in a quick game of Napoleonic Black powder today with the owner of the Austrians I'm just finishing up.

we play with the ranges from the book halved(due to smaller table) and it still gives a good fast game with a turn or 2 of maneuver. we do however leave the command ranges at 12" because of the way the figure are based.this allows brigades to be spaced out a bit.  we also allow the Overall commander(in this case divisional commander) to give orders to any unit that has not successfully been given orders(unless they were part of a blunder).

we also decided that disordering was too penalizing for us and we made is so that re-ordering a unit takes 1 move segment, instead of all turn. this change. if you roll 1 move, the result is the same as the rule as-written, but if you get more moves, you still get to do something. this also allows elite units to still use their rule special rule.

for skirmishers, we make them roll a 4+ to evade infantry, and a 5+ to evade cavalry. they get only 2 dice for shooting and 4 dice for hand to hand, but they retain thier +1 to hit modifier.

Of course, as usual, i forgot to take pictures until the end of turn 3. then i took another set of pictures when the Austrian division broke half way through turn 5.

The forces were my Baden division versus a division of Austrians.


the Austrians started deployed(mostly in attack column) along their table edge, and my forces moved on from mine.


here is the table as set up.


On the first turn, my entire cavalry refused to move despite the division commander yelling at them.
both infantry brigades got a double move.  the Austrians moved up, except the kaiser Franz regiment, who milled in the rear areas. this would end up being indicative of the regiment, as it would never move more then 10 inches form its starting point.

On the 2nd turn  the Baden cavalry brigade advanced onto the table(Finally!)  and the hussars raced up the far Austrian right flank to draw off the Chevauleger. the Cuirassier flanked the woods on either side at the crest of the hill overlooking the field in which the Baden cavalry now occupied.  the centers of both armies closed to musket ranged and exchanged ineffective fire. the  Austrian foot batter on the centre road caught the Baden artillery unawares and routed them off the table. on the Austrian left, the Kaiser Franz regiment once again refused to advanced 1 move for that one and only time they would actually do anything. In the centre the grenz infantry and Baron Priess regiment refused to move and instead reordered their lines.

during the 3rd turn, the  Kaiser Franz regiment continued resumed their inaction.  the Reuss-Greitz regiment fared slightly better, making their way at last to the other side of the field.  the  Cuirassier reached the edge of the hill and saw the Baden cavalry in the distance, and decided to wait and use the hill to his advantage in the charge to come.  the  Garde du Corps and Baden dragoons advanced further across the field before them. The Baden hussars charged the Austrian chevauleger but were overwhelmed and retired, not to be seen again that day.  in the centre, the 1st Baden infantry charged in at the grenz skirmishing before them, catching them off guard and routing them. the 2nd regiment(both battalions in attack columns) charged the 2nd battalion of the Baron Preiss regiment(in line) holding the orchard wall. despite being heavily outnumbered, the Austrians held the orchard and continued to fight.  the 1st battalion of the Baron Preiss regiment charged one battalion of the 1st Baden infantry, but the Badeners held  their ground.


The 4th turn began with  remaining Baden cavalry advancing to the edge of the field by the road.  the Austrian cuirassier raced down the hill towards the Baden position, but had misjudged the distance, giving their enemies time to react. The 2nd battalion of the 1st Baden infantry charged the grenz attack column, but much to their(and the Austrian commander's) surprise the grenz held, for now. the other battalion 1st infantry battalion once again held against the Austrian onslaught and the melee continued.  the 2nd Baden infantry regiment fared much the same  with the Austrians in the orchard.  the Baden colonel remark " these Austrians must absolutely adore apples, for I've NEVER seen Austrians defend an orchard so vigorously!"


on the Austrian left flank, the Baden brigade commander, realizing the slow pace(indeed, he hadn't entirely decided if it WAS moving at all!)  of the redeployed his formations to fire as the Austrians closed.


when the 5th turn came, the Baden cavalry sprung to life. teh dragoon colonel ordered his 2IC to counter charge with the 3rd band 4th squadrons, while he enveloped the flank with the first 2. the 3rd and 4th squadrons of Austrian Cuirasser, caught totally off guard by the brilliant maneuver, retired and the  dragoon commander took shameless advantage. just after the garde du Corps charged headlong into the first 2 squadrons of cuirassier, the dragoons made a sweeping advance  past the retiring squadrons and right into the flank of the other cuirassier formation. the guard du corps morale had been shaken by the brief melee, but  it was to late for the Austrian cavalry, and they were run down.


in the center, the 1st Baden infantry regiment broke the grenz column and routed the battalion of the Baron Preiss.  the 2nd battalion after defending the walled orchard for 2 turns from the entire 2nd Baden regiment, finally retires.  beaten but not broken, they would be ordered to withdraw before they got a chance to retake the wall.

alas, before teh kaiser Franz regiment could muster enough energy to move more then 100 meters, the signal to retreat is sounded. the brigade and overall commander could be overheard mutter about how even Hungarian regiments would have done more!

the game took about 2 hours to play.  genearlly derek(the austrian commander) rolled a little better then i did for shooting, and occasionally fore melee, but my morale saves and melee dice were genrally better.  derek's luck disappeared in hte 5th turn.  my cavalry got 3 moves, so it was a simple matter to maneuver the one dragoon unit into the curaissier flank before chargin home.  derek's luck really turned in hte melee rolls.

all in all it was a fun game.  hats off to the 2nd battalion of the Baron Preiss regiment.  a line battalion standing up and holding a full regiment in attack column for 2 turns, and retiring in good order on the 3rd?  I've never seen the like in an Austrian army!

And the Baden dragoons! what a spectacular finish! heroes of the battle! that roll came at a fortuitous time, and they forced one cuirassier unit to retire and outright broke the 2nd in 1 turn!!

" Extra rations for the men tonight!"

I haven't done a great deal of painting over the last week, but i finished basing 3 units i finished the week before. I've been gaming a fair amount and between that, painting, and family stuff I haven;t blogged much in the last week or 2.

I am once again  pleasantly surprised by the quality of old Glory Austrians.   Old glory get a bad rap some times. and after painting a an army of old glory Russians, i can understand where that reputation can come from, but the Austrians  just don't fit the mold.  they lack(from what i have seen) the ridiculous poses, and in most cases also the poorly sculpted faces.  they won't win any sculpting awards, but they also don't look ridiculous next to other(better sculpted) manufacturers. OG Austrians are certainly worth the money, especially with an old glory army discount.

we(the owner and I) chose to do his light infantry(both jagers and Grenz) in 1 line battalion and 2 skirmish battalions.  so with these units now finished we have a complete advance guard brigade of 4 skirmish and 2 line battalions, plus an artillery battery. we generally give the Grenz line battalion the unreliable special rule in Black powder, as the Grenz were not particularly useful in this formation(i guess they were just natural born skirmishers).  I also gave the Grenz both the liebfahne and ordinarfahne because we didn't have enough figures without it.

I have just a unit of grenadiers and a unit of Chevauleger to go and the Austrian army is done.
Posted by Stephen Thomson at 10:16 AM 1 comment: