A taste of things to come...

I finally started  assembling this:

there are 2 complete sets, so Stay tuned.
Posted by Stephen Thomson at 2:49 PM 3 comments:

about 5 years ago a friend of mine decided he wanted an Austrian army, and he wanted me to paint it.

He got the bulk of the army(all Old Glory done over the course of 4 months(10 infantry battalions, 2 cuirassier units,  2 artillery batteries).  not bad considering over the same period I painted my Russian infantry corps, half my cavalry corps, a division of Confederation of the Rhine and misc British and french brigades here and there for others.

after that the pace slowed a little ,with him giving me maybe 1 unit to paint every few months.  i painted an additional 1 grenadier battalion, 3 skirmish battalions(1 jager 2 grenzer) and a jager line battalion. not long after i finished, napoleonics died off   he still had more units to bet painted (1 grenzer line battalion, 2 chevauleger units 2 more grenadier units, and 1 more foot battery and a wurst gun battery) but with the waning interest in napoleonics,  we decided to hold off.


well now that I'm getting back into it and I'm getting a new group of guys into Napoleonic with Black Powder, he is having me finish off what he has in his Austrian army, and he's doing a similar sized Perry french army(which I'm painting over the summer). this will also help me French my rebuilding of my former old Glory Russian infantry corps, only with perry/warlord plastic Russians.  I never sold the cavalry corps, or my guard and militia, so it's just line infantry, jagers and grenadiers I need to rebuild.


anyway, so over the last 3 days I've painted 2 foot batteries and 1 Chevauleger regiment for the Austrians.  My friend opted to use Old Glory guns, with sash and saber artillerymen(i believe there was a S&S sale at the time).  i also talked him into avoiding old glory cavalry(which I'm not a fan of) and he bought Sash & Saber Chevauleger.

As i mentioned I'm not a big fan of Old Glory Cavalry. the never fit on the horses right, and  they seem tiny compared to the infantry.  I wasn't a huge fan of the Russian or British infantry either. however, i was pleasantly surprised by the Austrian infantry.  the sculpting seemed to be of better quality across the board, and the infamous awkward or downright anatomically impossible poses were almost entirely non-existant. the only real complaint I had with them was that some of the officers were rather undetailed.

It looks like this maybe the summer of napoleonics! stay tuned for more Austrians!

So after almost 2 years of kicking around my desk, I finally finished the 1st unit of Baden Hussars.  these are Perry french hussars , just painted a little differently. 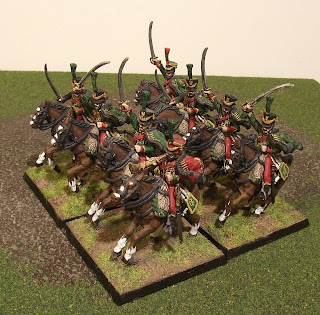 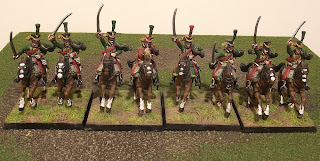 I still have 8 more hussars to paint, but I have a small commission to finish for a friend first.
Posted by Stephen Thomson at 3:19 PM 7 comments:

Cutting one Project to Fund Another...

the first time i saw Zvezda undead Romans, i fell in love with them.  I had to buy them, and make an army. unfortunately i only was able to find 2 boxes, so after painting and assembling one of them, i put the project by the wayside.

Then a few years ago at a Convention in my area, i ran into a guy i have known for several years, and i happened to mention the idea, and he  happened to know a store in London, Ontario that had several boxes, and the dream was reborn for a time.

I rethought the project.  now, it was a combination of humans and undead.  the humans formed the recruit/inexperienced cohorts. if they survived to become veterans, they went to the first cohort.  if the died, they were resurrected and put into on of the other cohorts. i had some old Glory Romans kicking around from years ago to use as the recruit cohorts, and i bought some of the then new  Warlord Hardened veterans to form the first cohort,  and a box of the resin and metal  roman artillery to supplement the dead artillery I had acquired.

then I got into Napoleonics, and the project once again fell by the wayside. then Napoleonics gave way into the current projects(WW2, FIW, Imaginations) and then my gaming group unofficially dissolved and i went back to school.


Now i find myself with all these figures, and i don't think the project will ever get finished.  my interest in fantasy is waned over the years, and although I think this army would be really cool to have, i just can't seem to ever find the time or the will(or the space) to actually DO anything with them.

As such, Ive decided to sell them to someone who might actually do something with them.

I would like to try and sell them in two groups first, but if there are no takers, I'll consider splitting them up.


Buyer Pays shipping from Canada. I'd suggest a service with delivery confirmation, but if you want to go cheap, I'm not responsible for things going missing(it's not happened to anything I've shipped, but you never know).

the assembled skeletons are fragile so I cannot guarantee they will survive shipping completely intact.   you can email me  at


and now the pics:


I've finally gotten around to starting the last of my Napoleonic Baden army. in this case it is a 2-stand artillery battery.  I used Front rank Bavarian Artillerymen. I also have them with Sash & saber Austrian guns.

When I had bought this stuff a couple of years ago, the only source I could find that mentioned Baden artillery equipment at all said that they most  likely used captured Austrian cannons.  Now there is a source mentioned on TMP that show that their cannons  were all cast in Bavaria, which I presume means they were french(since that is what the Bavarians used to my knowledge).  But i already spent the money, so I'm not changing them now.

the Bavarian artillerymen are not a perfect match for Baden artillerymen though.  the helmet should not have the plume on the side. however this is too much work to cut off a metal figure(and would require re-sculpting the side of the helmet) so I just left it black. also, the metal work on the front is slightly different. the  helmet should lack the medallion, and in it's place have a peak rising into the same point from the metal band at the base of the helmet.

I should perhaps also mention that some sources say that the facings and labels were edged in red.  I was using the histofig.com plates for my Baden army, and they do not show this. the histofig.com plates are the only source for Baden uniforms that I found that gives you ALL of them in one place, so i stuck with his interpretation. plus they are free.
Posted by Stephen Thomson at 9:48 AM 4 comments:

Of Cannons and Houses

Sunday and Monday, I painted up another of the buildings o got at Hotlead 2 years ago.  This was the same lot I got my church and Farm with. also in the picture is the first of 3 Royal Artillery teams from plastic the Victrix boxed set.

with the exception of the church, all the buildings I had had cast-on roofs.  I cut the roof off the building, and in this case added an internal floor(with a block in the middle for ease of removal).

the cannon teams are a nice addition.  the infantry are not as frustrating to assemble as some of the Victrix sets are, and they paint up nicely. Each figure in  the set comes with 2 or 3 choices of arms  and equipment to keep the poses fresh. you can probably make 12 or so different poses from the 15 crew in the boxed set.  the cannon is many pieces, including the chains on the underside of the carriage.  There are 2 issues i have with this set.  the first is the lack of horses for the limber(which is not painted up yet due to this fact)  this was a disappointing revelation. I would much rather sacrifice the 3rd team sprue for the 12 horses to complete the 1st 2 limber teams. the 2nd issue is the lack of wood grain on the surfaces that should have a wood grain.


Fortunately Perry makes a British 6-horse team available by itself(for a large wagon I'll probably get a pair of these later this summer to complete the limber teams.