About a month ago a friend and fellow miniature gamer from my World of Tanks clan(I'm a Deputy commander in the [CARD]1st Canadian Armoured Reconnaissance Division)  put me in touch with one of his friends.  this guy has a laser cutter, and does custom stuff for his local gaming scene.  I should probably also mention that both of these guys live in the US, and I live in Canada. I only mention that because I find many times, in situations like these, some  Americans don't like shipping internationally.

I was looking to get some pieces cut to make movement trays for my skirmish cavalry(which are on GF9 pill bases).  so i discussed the idea with him and he game up with what you see here.


I put together an order with 3 other guys. I bought 40, and between the other 3 guns there was another 80 added.  WE picked the order up form a US PO box just over the boarder last week, and i finished off 3 by mounting them on 1.5mm(1/16") plastic.  The pill bases fit perfectly.  I'm very pleased with the final product.

In other news,  after 2 months of waiting my local hobby store(not the Local gaming store, the actual model/RC/train store) finally got in my order of O scale   Spanish roof tile.  So now I can get going on the rest of my Spanish village.  I can't yet finish the Spanish church, but the grave stones will be ordered next time J & M miniatures puts in an order to Renedra.
Posted by Stephen Thomson at 2:19 PM 5 comments:

well last week I got back to college. any gaming stuff i do will probably slow a bit in pace.

anyway, Sunday and Monday(I have most of Monday off), I finished the 3rd base of my Spanish village. these are 2 of the larger buildings in the village(only the church is bigger at the moment) 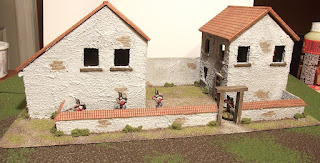 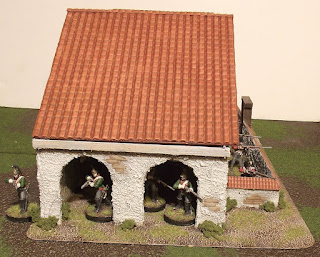 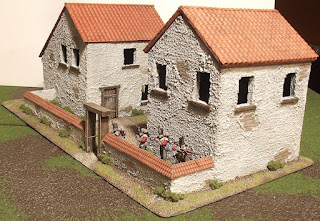 One thing I'm going to have to do is change where the roof braces are.  I usually place the braces to both reinforce the roof and make them snug with the inside edges of the end walls so that the roof does not slide around.  as you can see from the Coach house-type building the roof is lopsided.  I misjudged the braces on the one side of both buildings.

anyways, the church will be next, but I have to wait a few weeks, as i ordered a set of Renedra's Gravestones from J&M Miniatures to finish the graveyard. I'm also waiting on a local store to get in more Spanish roof tile sheets to finish off the other 4 or 5 buildings. in the meantime if i have any spare time, i may just paint a few peninsular figures.

The Beginnings of a Spanish Villiage

I have long been building a series of Spanish  buildings.  I posted WIP pics of a Spanish church in May 2001, and in July of this year I posted pictures of my WIP  Peninsular war Spanish village.

the Spanish church has largely been on hold until i could find a set of suitably Spanish grave stones.  as such i decided to try and get a few bases complete, and test out the texturing and colour scheme. I finished detailing and painting the small house  and yard, and the larger Spanish Hacienda.

Getting some terrain has long been a sticking point for really starting my peninsular war skirmish project. now that i have some buildings and one or 2 more bases on the way, i can realistically start thinking about getting more figures painted.


I settled on a mixture of water, white glue, durabond 90 and fine balast for the texture. this is a modified recipe that i used for the rock outcroppings i made way back when i started the blog 2 years ago.  the druabond dries hard as rock, and the white glue makes it less prone to chipping. the combination is  very durable. you would not know from feeling teh courtyard walss that they were made out of foamcore.

For the large hacienda, i still need to put some plants in the planter in the courtyard.

I almost have another base ready to be textured, and if i can find some  more O-scale Spanish roof tile i can have 2 more ready to go, plus maybe a town hall.  the church will be last because i have to order some suitably Spanish graveyard accoutrements.I'm also looking at buying a nice set of doors for the front of it.