Last Thursday I finished up the Kurfurst Regiment battalion guns and the 1st squadron of Metzger Kuirassier.

And  this is how the armies look now:

I need 2 Tufekci and 3 Sipahi to finish off another unit of 8 of each. then I will eventually also add 2 or 3 units of Delhi cavalry, and maybe a battalion of Levant Infantry.  For the electorate army, i have the 2nd  battalion of the Kurfurst Regiment, plus a company(8 figures) of Kurfurst grenadiers(which get detached to and  combined with Kurprinz Grenadiers to form a grenadier battalion in the field).  In the future, i plan to finish off the Metzger Kuirassier, then add a unit of Pandurs, and a regiment of 30 Osterhaagen Dragoons(3squadrons of 8 dragoons, 1 of 6 Dragoon Grenadiers). Once that is done, I'll probably also add the Kurprinz Regiment.

This weekend was Also The annual Southern-Ontario Convention, Hotlead.  I've attended this  for 15 years now.  this year I got a Ride up with Martin Jensen and Mike Thompson(no relation) in the WGG Distribution truck. I also shared a room with Martin.  Both guys are Great fun to chat too about all things gaming.

I took about $300 worth of stuff up to the Hotlead brin & Buy.  I used to help out at the MIGS Bring and Buy, so i always take the time the night before i leave to take the bring&buy PDF sheet off the Hotlead website and fill out on the computer, and print off corresponding labels.  Some friends joke about how anal it is, but it really simplifies the process for both me and the Bring & Buy guys. Also, i don't have teh neatest of handwriting, so it solves that problem also. anyway I sold eerything for $295(less 10%) and was a very happy camper!

This year at the Bring & Buy, I saw a gentleman bring in a File box with 6 OOP HG walls Buildings, including my favourite Church model. I told the B&B guys to toss the box aside and I'd buy it all. well i lied a little, I bought 4 and got another Con-going acquaintance , Gary Shoefield to buy the rest.  They were amazingly cheap too, ranging from $20 CDN for the Church, down to just 12 dollars each for the small buildings.  This was the highlight of my weekend, as i always find myself, lacking buildings for my games(since I only enjoy making the more natural terrain).  I also bought 1 AGNM Somua and 2 Crusader 25mm AT guns for my french , and a pair of AGNM Panzer 38(t)s, An AGNM PaK 36, and a pair of Crusader AT rifles teams for my Germans.  I bought a set of Renendra Tents for my various horse& musket periods, and on sunday afternoon, i spotted a BH JS II that Don Cameron(Five Arrows Books) was trying to get rid of, for $5!!  I don't do late war, but i couldn't resist the price.  I'll have to pull this on Dave one day and scare the crap out of him! 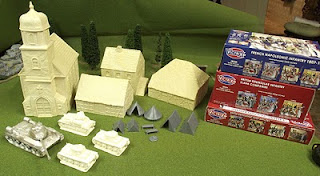 Last but not least I bought 3 boxes of Victrix figures for Peninsular war skirmish.  I've been thinking about doing this for a while.   Martin gave me a bit of a deal if i would do a bit of historical demoing at stores in the area(to create some interest) which pushed me over the edge.  aside from the buildings, these will probably be my immediate priority.

In addition I talked to new friends, new & old. I talked to Jeff from JTFM enterprises about casting techniques and materials for a while Friday night.  I talked to a number of locals about possible future painting commissions, and saw the first attempt at sculpting from my friend Gordy. Gordy's first attempt at sculpting was on Thursday. he had it essentially finished when he showed me on friday night at the con. I was very surprised at how nice his first attempt was. while not quite production quality(at least by my standards)  it was very near(and better then some stuff people do produce).  I'm sure his next few sculpts  will easily get there as he clearly has the talent(and speed!) for it.

I ran a few games at Hotlead last minute.  I emailed James Manto(con organiser) on wednesday about it.  I ran a game on friday(which did not get played) and then I ran a pick-up game Saturday evening, in which James Manto Himself took up the defense of the Electorate. I ran the game again for a full crowd of 4 people on sunday morning.  In both games, the electorate forces did very well, despite having a bit of an up-hill battle( outnumbered both in cavalry and infantry). in the  saturday game james manto doggedly defended his line, never wavering and keeping the pressure on the turkish.   In Sundays game  The Eletorate forces were played by Barry holden and Nick W. and once again the performed very well, holding off the Turks controlled by Mark Degner and Chris.

The scenario was set in the dire days of the Kurfurst's rise to power.  With his father dead, several neighbors thought that Friedrich I would be a pushover.  His father had secured the borders for many years, and Friedrich has never actually seen combat. The electorate's forces were stretched thin  dealing with border incursions on nearly all sides, when a sizable force of  Janissaries and cavalry had attacked and sacked several towns and villages along the eastern marches of the electorate.  wasting no time,  Friedrich raced back with his childhood Mentor  Heinrich Metzger to the capital, grabbed the depot battalions of both their regiments(and a battalion of Militia) and raced off to hold the Turks until reinforcements arrived.

In both games the Metzger Kurassier were outnumbered 2-1 by Sipahis (half of which were also lancers) but enjoyed a slight advantage in quality, and being aggressive when initiating fisticuffs.(defending the homeland and such). In both games, the Kuriassier, led by the (now) hero of the Electorate, Colonel-Inhaber Heinrich Metzger was badly wounded. but in both games, the Kuirassier crippled the Turkish cavalry and secured the flank  before becoming ineffective themselves. the outcome of the game would partially decide

in both games, the Kurfurst took direct control of his regiment's artillery for the 1st half of the battle  and then proceeded to Rally his troops were needed in the 2nd half.

Everyone seemed to enjoy the games, and the convention seemed well attended. Now I look ahead to trying to get back down to Historicon this year(need to raise the money)  and then Council Fires & MIGSCON in October.
Posted by Stephen Thomson at 1:58 PM 11 comments:

Yesterday i finished off the last of the complete units I have for the Turkish: 2 untis of Tufekcis Infantry.  I still have 5 Sipahis and 6 more Tufekcis to paint, but they will wait until I can afford to fill them up to 8 figures each.

detailed information on these guys is hard to find.  Pictures are even harder.  the only picture I have found was in a copy of Osprey Men-at-arms 140 - Armies of the Ottoman Turks 1300-1776. also in the book it has a short paragraph saying that they appeared in Rumelia around the middle of the 1500s, and became a common troop type in the late 17th and early 18th centuries.  they were well trained and disciplined marksmen, and that some of them may have been mounted infantry.


What is interesting is how very much different they are from most Turkish units. their uniforms are  remarkably uncolourful, and have short-cut coats.  they also look like they are wearing putees.  they could easily fit in with most Colonial period armies.  I deviated from the picture in osprey on 2 details. I changed the Brown waist sash to the same colour as the electorate coat(mustard yellow)  and i also added a yellow feather on the 2 officers headgear.


As usual,these TAG figures are beautiful. All my Turkish and Polish are TAG figures, and they are second to none in quality.
Posted by Stephen Thomson at 12:44 PM 2 comments:

I just thought I'd Post a few pics of a commission i did a few weeks ago.  I painted these for Sean Malcolmson, a frequenter of my local gaming club.  He did the basing himself, and brought them down this weekend.

I started the first group of 8 Kurfurst regiment soldiers last Sunday night.  I awoke Monday morning to find the TAG Turkish order I had been awaiting.  I hurriedly finished the group of 8 electorate soldiers and then quickly started cleaning and preparing the Turkish.

Tuesday and Wednesday I spent cleaning out the back room in the basement in preparation for delivery of a new smaller Deep freezer. I also had to rip down a crappy unfinished shelf that has been there since we moved in. Thursday Thursday  I spent several Hour painting the 2nd unit of 8 Sipahi for my army.  I plan to have 3, but I need to grab another pack of  Sipahi with swords to complete the final unit of 8.

Friday I  spent most of the morning dealing with the freezer delivery and assembling several cabinets to fill the newly freed up space.  in the afternoon I painted most of the new Turkish command I got(for the 2nd battalion of Janissaries) and the Regimental Kazan.  The Kazan is essentially a ceremonial soup pot carried into battle.  it became a rally point on the battlefield for the Janissary regiments. After that I also painted the Turkish cannon i bought. unlike the Electorate's Kurfurst regiment, which has 2 battalion guns, my Turkish army has a single field piece(in the Turkish army, in any other army it would have been a siege piece)

And that's all for now. I plan to finish the Turkish i have before continuing the Electorate army, since the Turkish are further along.  As it stands, I have more 8 Janissaries, as well as 24 Tufekcis Skirmishers.
Posted by Stephen Thomson at 8:05 PM 3 comments:

While I was waiting for more imaginaton figures to arrive, I encountered a reverse bottleneck of sorts. I had very few figures to paint and the commissions had temporarily petered out.  I had been considering making a map of my gaming group Imaginations.  I built the basic Continental outline in Campaign cartographer(about teh only good feature of that terrible program) and then exported it to PNG and applyied textures and everything else in Adobe Photoshop.  After a bit of tweaking, I came up with this: 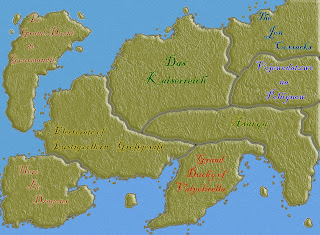 Also, I've been trying to find suitable cavalry for my Renaissance Polish Haiduks to be able to use them(Winged hussars just seemed to anachronistic for the mid 18th Century).  after a bit more reading on the polish in the early 18th century, I began looking for pictures, and the miniatures of early Uhlans. what's interesting is that the early Polish Uhlans were dressed in a similar fashion to Haiduks. I found that Front rank(early bosniak lancers) and Eureka(Polish Uhlans in the Saxon range) both make some. The Eureka figures end up cheaper after shipping, So I'll probably go with these.


I already have 72 TAG haiduks(48 musketeers and 24 with Bardische axes)  If i get these cavalry, they will fit in nicely style-wise with them. I'm also going to bet some Old Glory Renaissance Polish artillery crews, as they are also dressed in the haiduk style.  this will give my army the uniformity expected in an 18th century style army, but with the cool and unusual style of the Haiduk uniforms.  the nation, as you can see on the map, is called the " Vojewodeztwo na Polhynow" (Palatinate of Polhynov in English).


I also received my Electorate figures earlier this week:

I'm still waiting on my order of Tag Turks to arrive.  it should be here tomorrow or next week.
Posted by Stephen Thomson at 11:57 AM 7 comments: