I haven't posted in almost 3 weeks, but that's mostly because i hadn't finished anything until late last week.

2 weeks ago I started back in on some peninsular war buildings. I'm building a Spanish town to skirmish in.

I've posted pics of my Spanish Church WIP. I haven't done any more work on this one yet. I need to get some Headstones for the grave, but until then I don't really want to put any more work into it if i can't finish it. I have leads on some nice gravestones though, so stay tuned...

in the meantime I've been working on a few bases of buildings. they are in varying states of completion.  the first is the most complete. all i really need to do it make some doors, put the texture on the walls, and paint/base it.

I've added some  bits of stone brick on the walls. when i put the  texture on, it will go just over the very edge of the plastic brick, and make it looks like the stucco is cracking and falling off.

Next is the smallest base so far.  this is a small  house and yard, with a home-made lean-to.


this one is almost at the same stage as the first one, except it still needs some stone brick sheet placed around the house and walls.

the last one(so far, there will be 1 or 2 more) has the buildings done but needs walls for the courtyard, and 2nd floor, as well as the aforementioned stone brick sheeting.

iv have one or 2 more bases still to do, but i ran of out tile roof, so I have to wait until the local store (Dundas Valley Hobby) gets more roofing tile in.  I also have a 2nd set of pieces for the church which I think I will modify into a Town hall with a square in front.

Next, are the things I actually finished.  these are units that are part of a commission for my Friend Derek. he wanted a French army to fight his Austrians,  so here are the first few units.

Since we generally do our armies for around 1812, i have done these with hte pre-1812 flags, since most units didn't get or use the 1812 patter standards until early 1813, after the end of the Russian campaign..

I have 2 more line units and a battery of guns, to finish the first brigade of french. I should be done by the end of the week.
Posted by Stephen Thomson at 9:32 AM 3 comments: 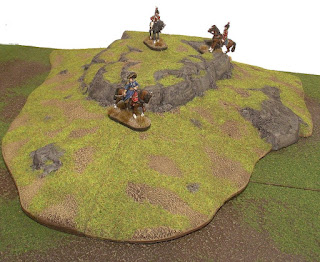 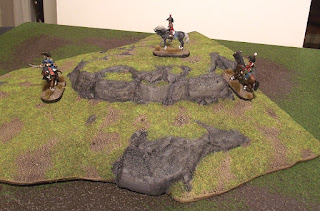 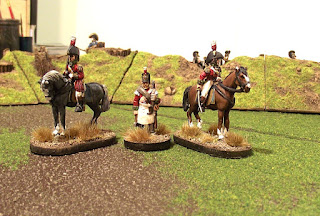