In the recent foundry order i previously mentioned, i grabbed the 'Napoleon, Marshals and Staff' pack.  I've been looking to get this pack for a while. and the price cut really made it possible. the figures depict napoleon as depicted in a famous painting of him at Borodino by Vasily Vereshchagin .


I tried to capture the spirit of the painting in the arrangement of the figures on the base. I also added the little dirt drop-off in front of napoleon.


and of course last year, the Perry Bros stared their Napoleonic Russian line, of which the first pack was Russian high command at Borodino. this one was bsed losely on the painting Mikhail Kutuzov at the Battle of Borodino by Anatoly Pavlovich Shepelyuk.


I've posted a pic of these before because I painted them last August.  This picture is better, and it seemed apt to post both command stands  together.  The Perry's penchant for research is obvious in the inclusion of General Wilson, a British officer and adviser to the Russians during the 1812 campaign. He was present at the battle of Borodino so it makes a lot of sense to including him in a high command pack.

Posted by Stephen Thomson at 9:48 AM No comments:

While I was at Hotlead this year, i picked up a few things, including a  Victrix British light battalion conversion pack(a rare find in person these days, since victrix metal line was sold to brigade) and a warlord ECW cannon & specialist pack. 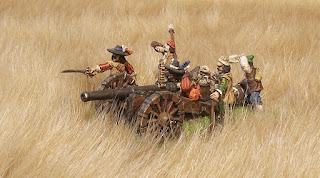 when exams started , on a whim, i sat down and apinted the cannon team with the  gunner specialist from the specialist pack.   I had decided to paint something different after the relative monotony of the Peninsular  Napoleonics.  despite a total lack of opponents I still intend, at some point int the future, to finish my ECW army. 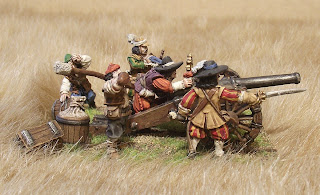 This really is a nice piece, an the addition of the specialist aiming the gun really  makes it that much nicer. the Warlord ECW  line really is their best offerings.  the sculpting is head and shoulders above that of the Napoleonics they've been releasing.


Next is a set of Perry Plastic Carabiniers I painted 2 weeks ago. this is part of my friend Derek's French army. you'll be seeing more of Derek's French as I paint it over the summer. 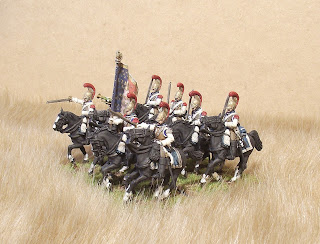 These were quite nice to paint(as perry miniatures often are). I'll be doing a regiment of these when I eventually do my own French contingent. 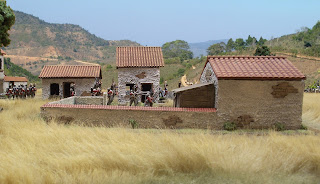 I had taken some pictures close in on my new fur mat when I set it up for the first time. I got bored 2 weeks ago, and grabbed one of the pics and photoshopped in a background. this is the result.

Posted by Stephen Thomson at 5:38 AM 6 comments:

After hotlead was finished, school reared it's ugly head. we had all kinds of issues with  professors so i really needed to buckle down. in the words of one friend:

My college course has somehow become a National Lampoon film, with me as a character within it. A real life college course can not possibly be this outrageously poorly run. I can only comprehend the last few weeks by believing I am actor trapped in a never ending college comedy flick, and not as a human being in a real world college.

sadly that was a common feeling.

After the year was done, i ended up being occupied by a seemingly never ending succession of renovations.  first was ripping out a wall so the crack in the foundation could be fixed. then it was pouring a concrete pad for a shed, and then assembling the shed. following that, i had to insulate the enclosed porch out back, to make it a 3-season room.  while we were doing that some mild leaks popped up in the roof  of the porch, so we had to fix those as well. all of this was in preparation for the new windows and door going into the back porch.

earlier this week i finally snapped some pics of a few things. the first of which is the 2 armies I used for the Sharp Practice game I ran at Hotlead entitled, "Assault at El MAtadaro".

in this scenario, the french were assaulting the fictional town of El Matadaro. the terrain is that seen in the previous thread.


the french infantry are Victrix 1808-1812 french.  the dragoons(both mounted and dismounted) are perry, and the cannon team and crew are Front rank. there were 3 line company groups, 1 grenadier  group, 1 voltigeur group, 2 dismounted dragoon groups and a mounted dragoon group. then of course the gun team.

In the battle at the convention, the end result was a draw.  one British cannon had been captured, the other one was be mandhandled back a bit. the french had made it into the edge of the town but had not made much more progress past that.


also, a few weeks ago, i ordered some Napoleonic stuff from foundry, in light of their new pricing.  they had brought back individual packs of  Russian opolchenie, so i picked up enough packs to finish of the 2 half units I've had unpainted sitting in boxes.  I also grabbed 3 packs of jagers in firing line to use as skirmishers. I also grabbed the Napoleon, marshals and staff, which is a vignette of a painting of Napoleon at Borodino.

In addition to that, my birthday was last Friday, and my father ordered me the perry Russian command sprues I needed(22 to be exact) to be able to make units out of the 2 warlord Russian starter armies(which had 1 command set of 4 figs for 120 infantry!) , so I'll be starting in on them soon. they gave him a call the day after he ordered to confirm he actually wanted that many.

so expect to see lots more Russians in the near future, as well as more french for my friend Derek's army./

Hopefully I'll be posting a little more often now that the pace of renovation has slowed a bit.