I was recently looking through my renaissance armies and AWI continentals and realized I was missing a few command stands. 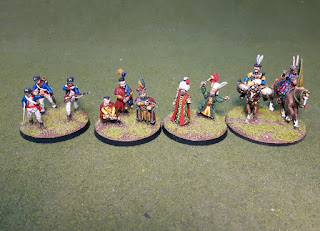 I had the  2 of the miniatures for the Continental light infantry stand painted already. I did an arm swap on the NCO and I built the musician form an extra  figure I had left over.  The musician arm holding the horn and the both the NCO arms are modified Victrix French 1808-1812 arms.  I had seen some research when I was reenacting that hunting horns may have actually been used in the continental army. one specific reference is to using  conch shells as substitutes because the musician's "horns" hadn't arrived yet.  Horns or bugle-horns adopted by the british jsut ptior to hte American revolution, and presumably by the Continental army, had more in common initially with hunting horns than modern or later 19th century bugles(see Article). Also given the propensity of  Colonists of German descent to equip themselves with German weapons(german rifles anyone?),  it follows they might use the traditional German hunting horns also.  This unit in my collection was painted to be light infantry of a Pennsylvania regiment, so there you go. that's my rationale.

The Eastern renaissance Command stands consist of a Sipahi, a Janissary, and a Polish guard Haiduk stand, All The Assault Group(TAG) Miniatures. TAG  Miniatures are always fun to paint.  THE Polish Haiduk command packs each come with a young boy holding a weapon for his officer, which adds a lot of character I think. The musician is from the haiduk musician pack. the Ottoman Janissary command stand is one janissary officer with one of the "exclusive" miniatures, which is an ottoman higher officer of some sort.


so with this the AWI and Ottoman projects are pretty much done for now. I still have 24-ish renaissance polish cavalry to paint, but I have no where to store them at the moment. and I won't bother finishing them until I have a decent storage option.  Sadly that will be a while as I'm still unemployed at the moment and very low on funds.

After having done a bunch of AWI figures recently for sharp practice, I had a conversation with some local guys about what figures I had.  I realized that I had an entire old GW case full of Native Americans left over from the French and Indian War project I sold off 5 years ago.

Upon inspection, I remembered I had updated some of the painting on most of them, but had not photographed them afterward. These are a combination of pre-Warlord Games Conquest Miniatures and Perry AWI Native Americans. the ratio is about 40% Perry, 60% Conquest. 58 miniatures in all.

I still have a couple of chiefs to paint up, as well as a Christmas miniature(native pulling a Christmas tree) and the Last of the Mohicans character pack to repaint.

Posted by Stephen Thomson at 8:23 AM 2 comments: