Hotlead wrapped up last Sunday.  it was a good con this year. according the the Con Chairman's AAR, the con saw a rise in games to 70, from about 55ish last year. the Bring and Buy did around 18000 in sales, which means the Con's cut of 1800 will be donated to charities(Scouts and cadet groups in the con's region.).  Sunday as especially surprising.  I've never seen a convention so busy  on a Sunday!  here is a link for Jame's Manto's AAR for more detailed breakdown and pics!

I went up with J&M miniatures and helped out at the booth most of the weekend.  they also had a good weekend from the looks of it.   James and Martin attribute it to being present all 3 days, and having a better selection of merchandise.

My napoleonic game went quite well.  despite the previous table users taking up about half my setup period taking down there, and the resulting late start. we finished the game in 2.5 hours.  pretty good, considering the game involved 600 infantry 128 cavalry and 27 guns on the table with 8 players.  the Russians/Austrians won but just barely. i was a little bit worried initially as the french took a beating initially, but they came back to almost even up the army morale chits before finally succumbing to the allied onslaught.  Thanks go out to Mike Garner and Jon Holmes for helping me GM the game. the pics below are courtesy of Mike Garner, as I completely forgot to take pictures(as usual) 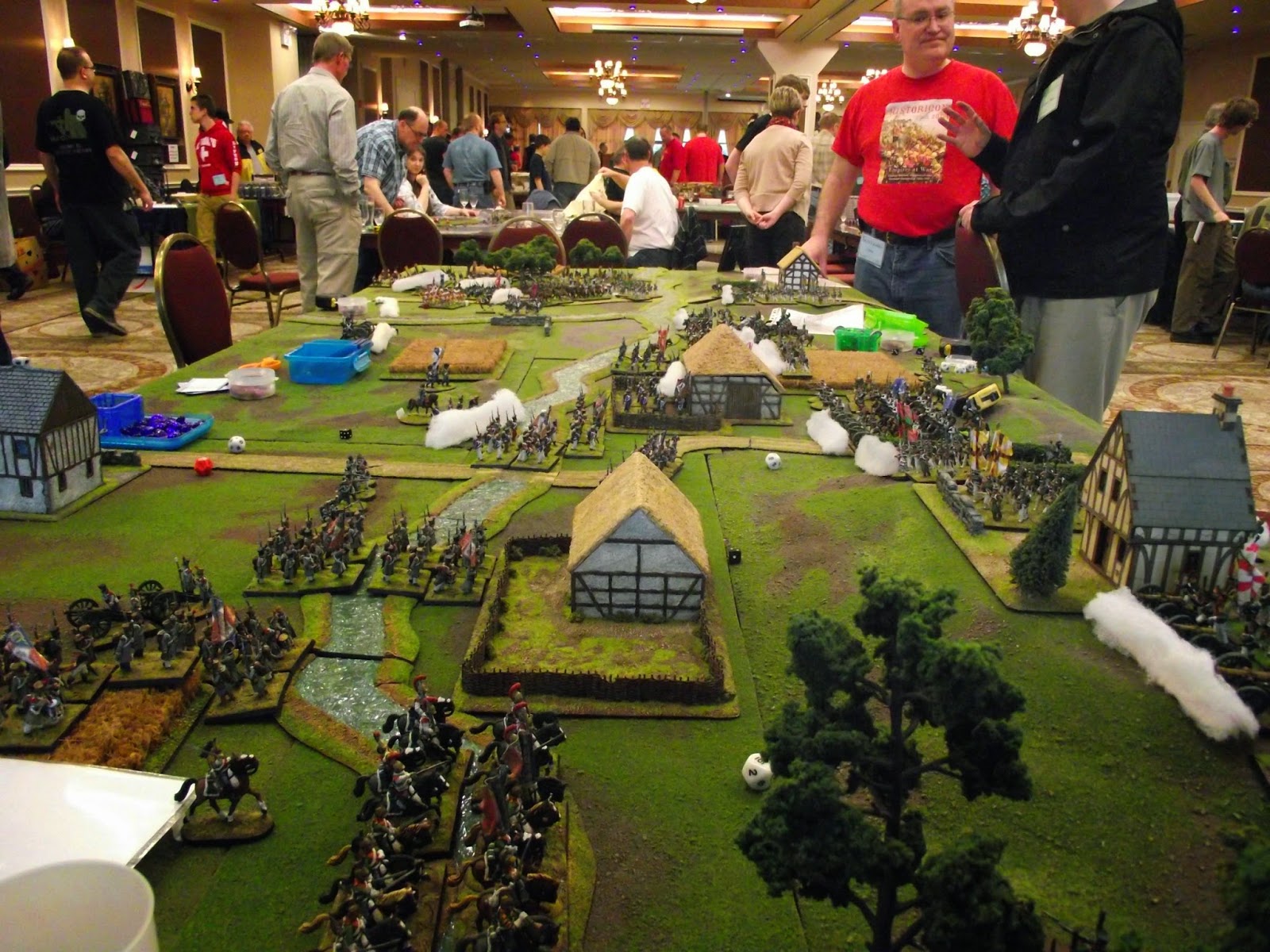 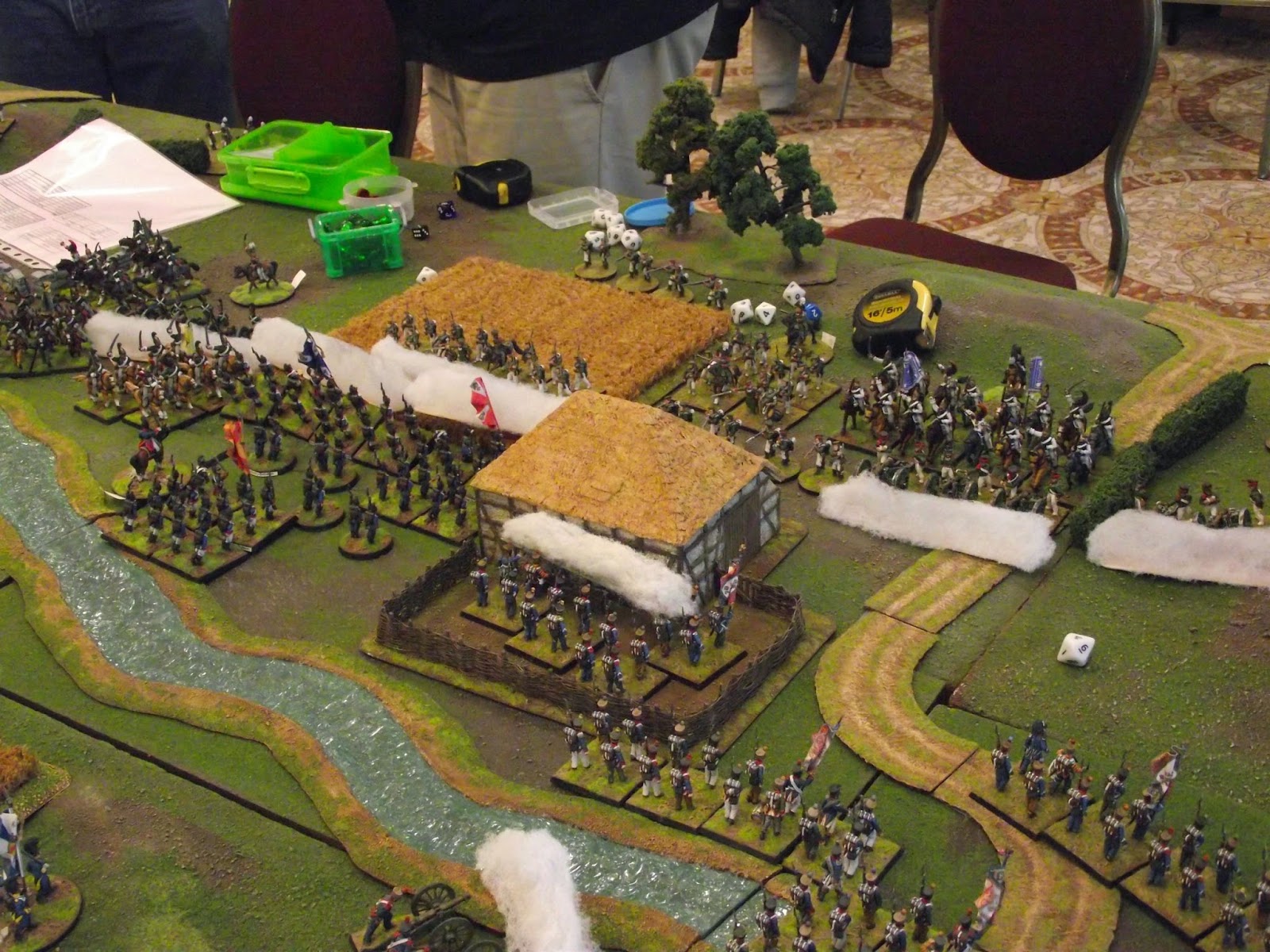 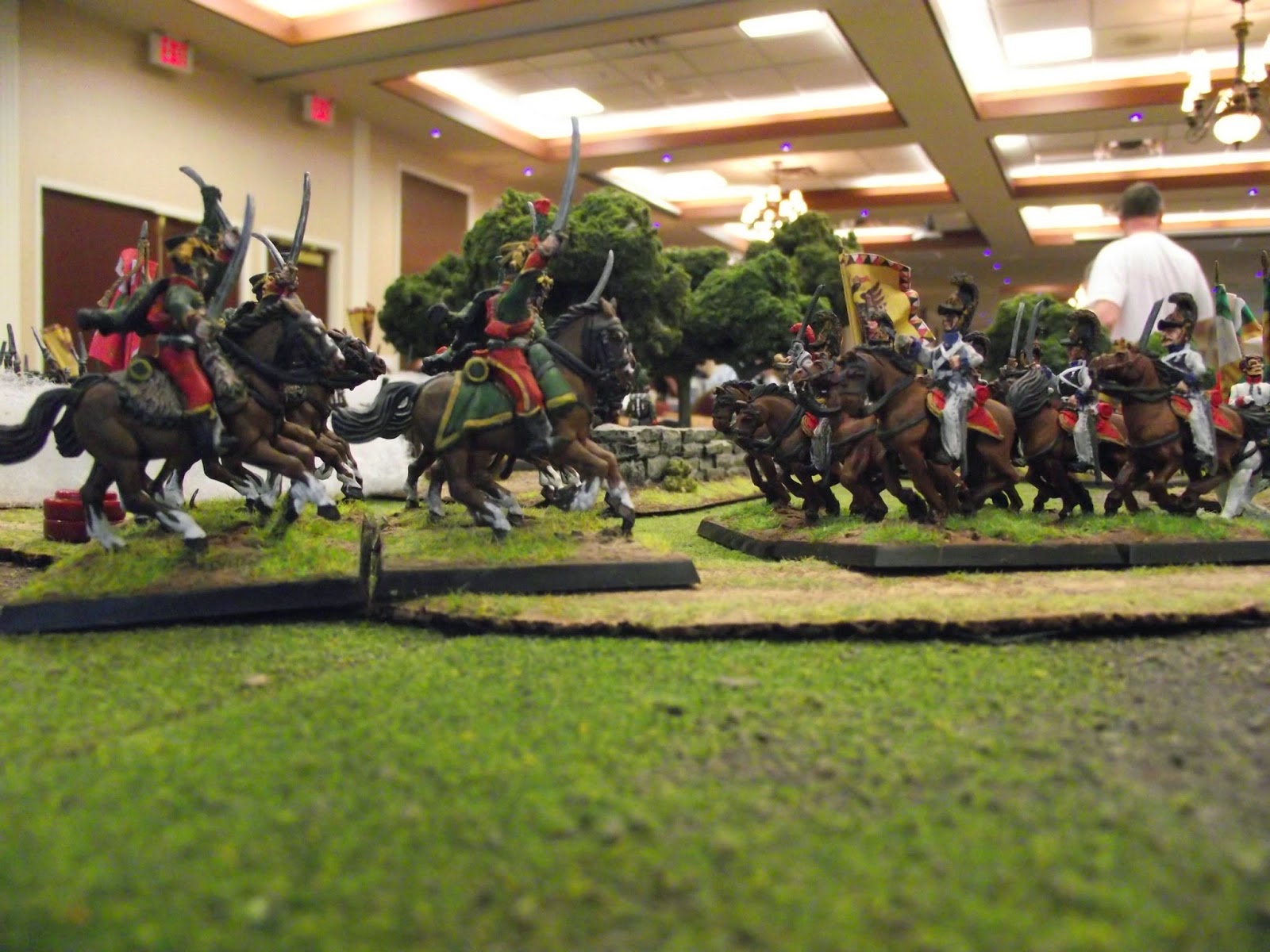 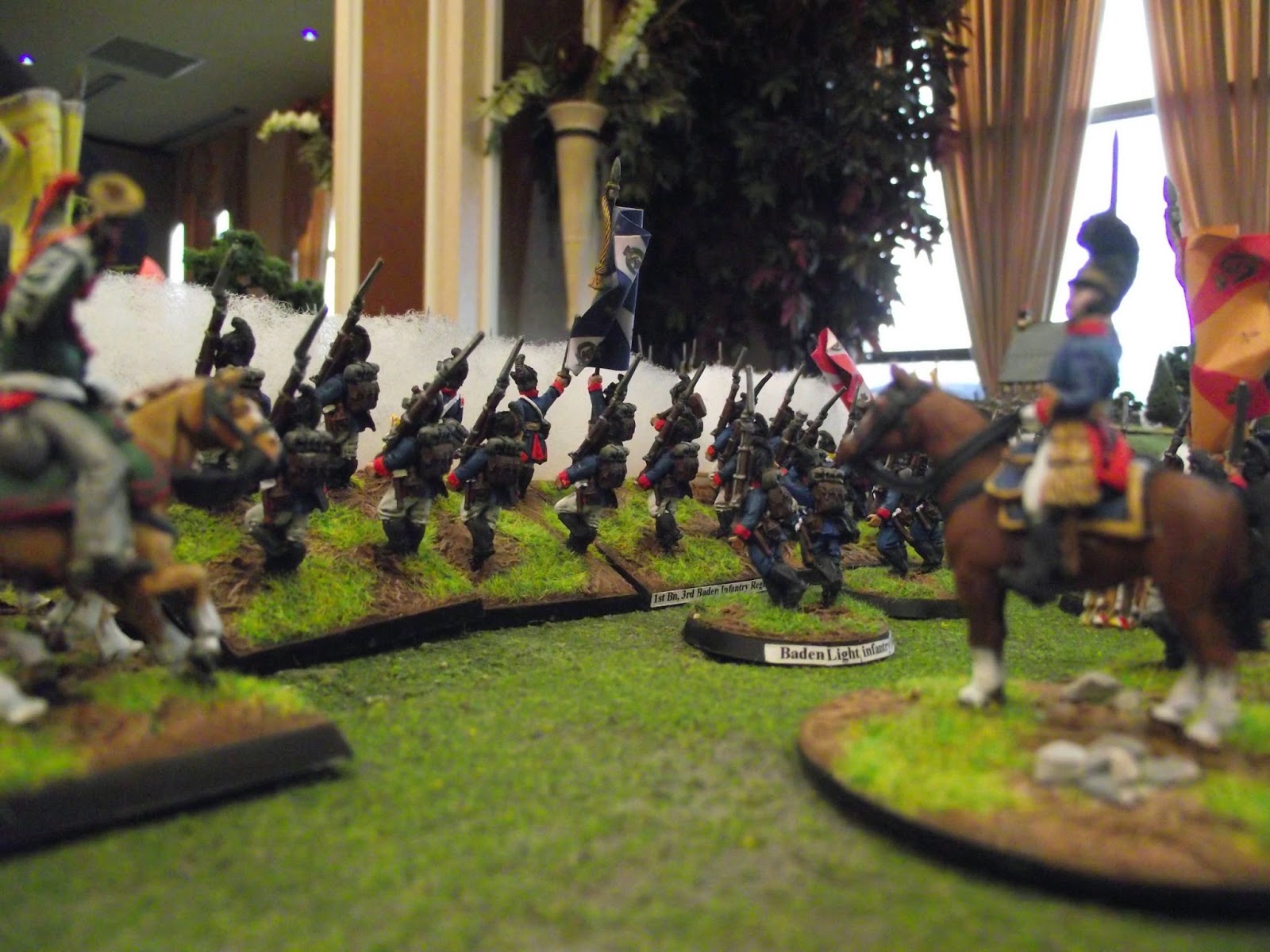 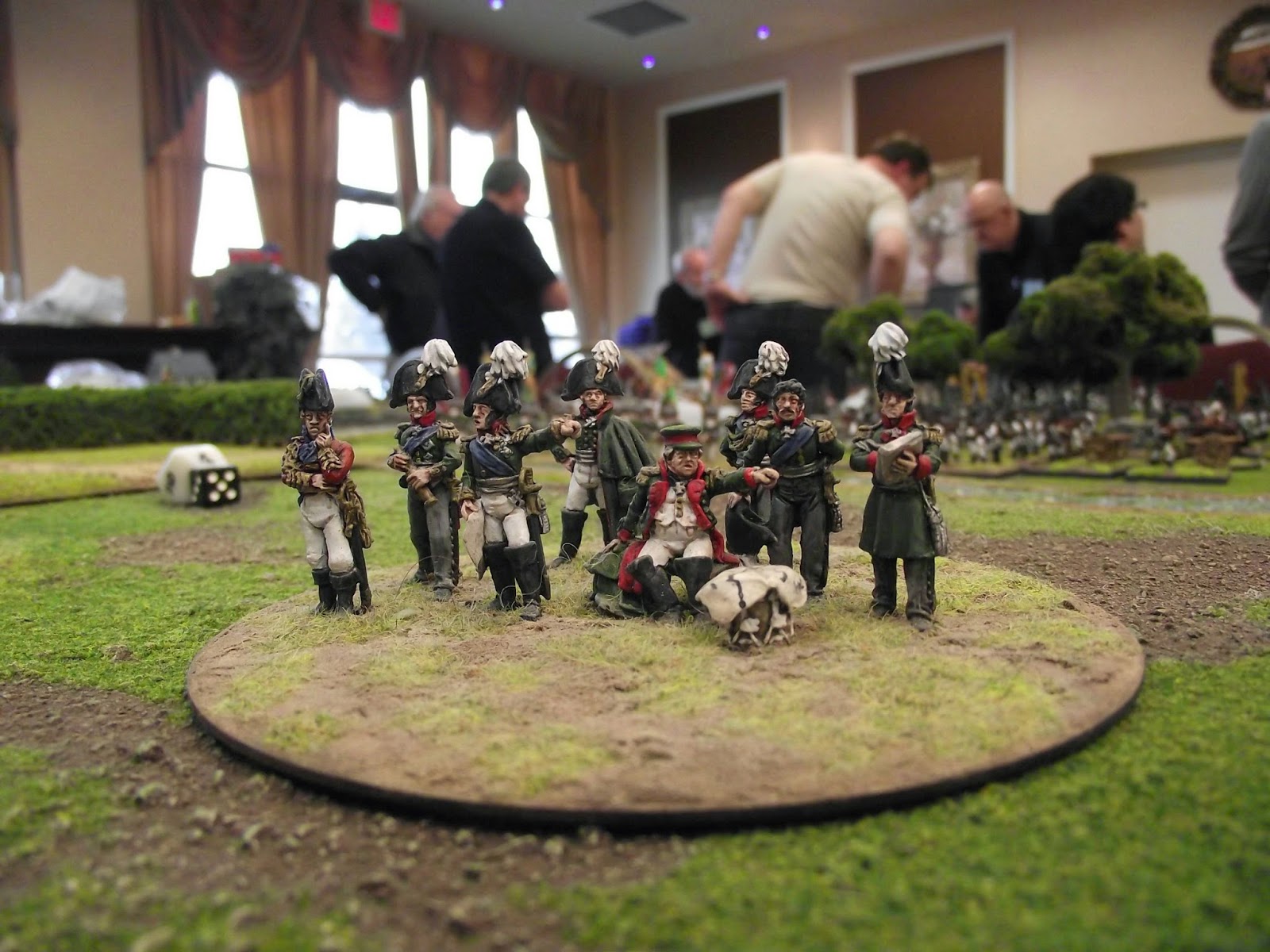 finally my favourite part, the spoils.  as seen below i picked up a great deal of terrain as the majority of  purchases over the weekend(all 28mm where aplicable). I bought  from 4ground an ECW/renaissance Cottage and shop, a Saxon/Medieval dwelling, a water cart, and 3 packs of walls. I also picked up anther box of Perry Napoleonic Russians(still need one more to finish off the 26th division)  a box of Wargames factory Viking Huscarls, and a copy of Dux Britnarium.  I also picked up a broken resin bridge for really cheap, and finally took delivery of an army group north KV with 3 turrets to make KV1/40, /42, and KV2.  this was bought 3 years ago, but has been sitting in our friends basement ever since.  There is also a bag of loose GW LOTR miniatures. 5 metal war riders including Sharku, and 25 odd metal dwarf warriors and bowman. Not pictured are the Xwing purchases of the  Imperial aces box, an Awing, a TIE advanced, and a HWK-290. 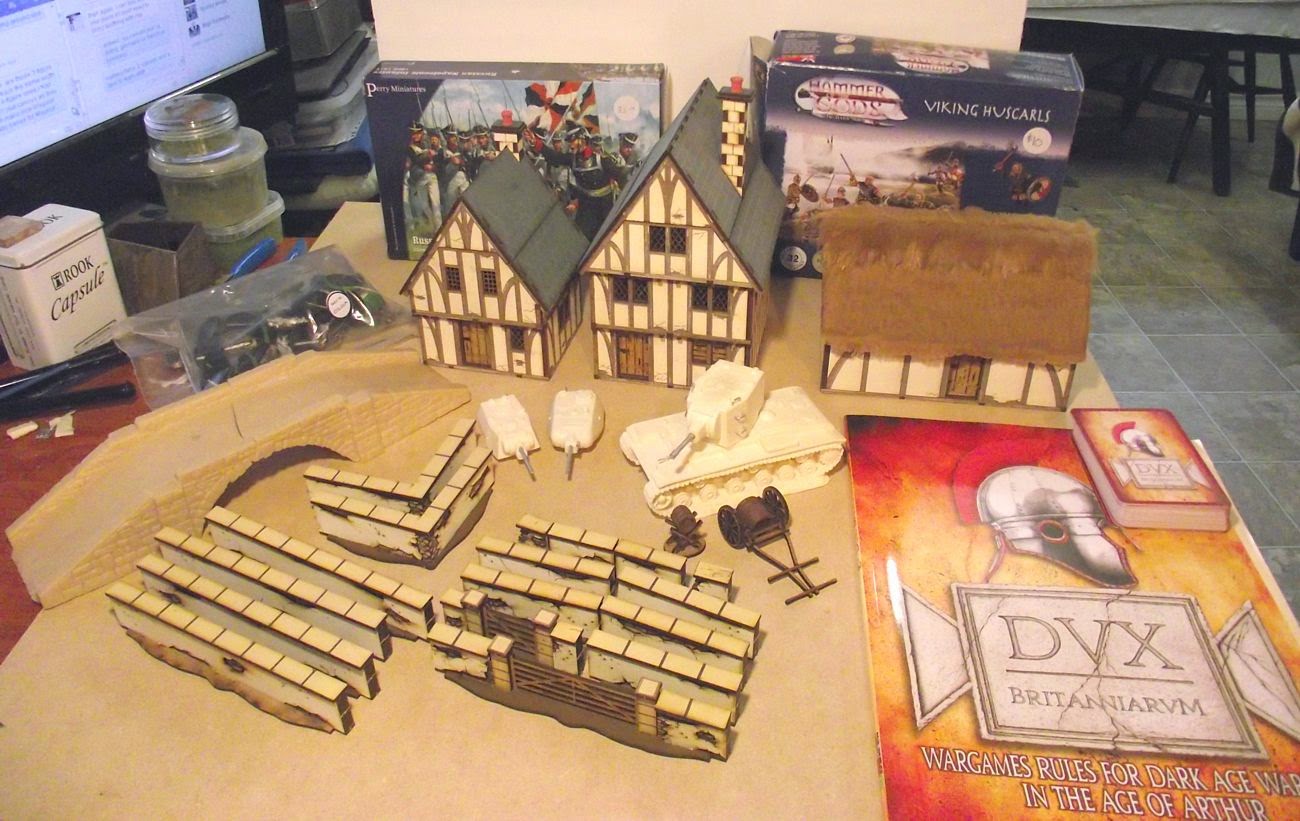 the 4ground walls seem like they are expensive, but these 3 packs got me enough walls to do an 18x18" walled area with 2 gates, and even  destroyed wall ends if I so choose.  I paid 40 dollars for them, and the closest comparable product is something like Acheson Creations wattle and timber set which is a 12x9 area for the same price. and they are rather nice walls too.


Incidentally, I have some 28mm TAG Iraqis for sale that I did not sell at Hotlead.  there are 4 groups of 8 iraqi regulars, 2 groups of 8 republican guard(in the 3 tone camo)1 group of 4 snipers and command,  and 4 groups of 8 fedayeen. I'm selling these at $40USD per group of 8 + shipping. if you are  interested  email me at crucible_orc*AT*sympatico*DOT*ca
Posted by Stephen Thomson at 12:19 PM