Joining the Janissaries that i painted earlier in the week,  these are the first cavalry to be finished since i decided to rebase to the pill hsaped base.  I definitely prefer them to the 40mm bases i  had originally planned on using. these guys will eventually be joined by a mostly lance-armed Sipahi unit. 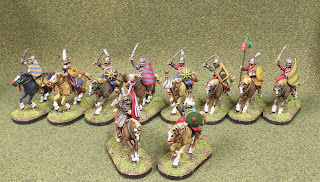 These guys are lead by Devrim Uzanlar. he is athletic and an  accomplished rider who is universally loved by his troops(so says the Character generation in Sharp Practice).

I have 2 more groups of 8  Janissaries to paint, and 2 more Sipahis with lances before i run out of figures. but i have to devote some more time to some commissioned War Machine figures. I'm planning to finish 20 figures for Sunday, and then the remaining figures of the commission by the following Sunday.
Posted by Stephen Thomson at 10:05 AM