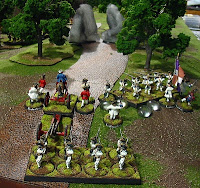 Today saw the conclusion of our battle. the first turn back saw the tiffin cards come up in quick succession. Only a unit of Natives in the entrance way of the village got to move.

When we left off, Major washington was in a precarious position. his survival of his men survival(and his very own as well!) depended on beong the first to act.  This was not to happen.  Lt. Lafreniere's infantry got a shot off, getting another shock point. then Majeur Duperre charged into fisticuffs. After 3 rounds, the french were finally able to destroy the poor quality Virginia militia.  Washington himself was badly wounded and left for dead.  but the Virginian militia did their job.  they not only single-handedly held up more the 3 times their number for 3+ turns, they actually managed to kill nearly a third of the french infantry, and caused enough shock points to the french to keep them in disarray for the next 2-3 turns. For this alone they get the MVG(Most Valuable Group) award for this game.

In the middle, the 2 units of Native not on the gate platform Made for teh closed British artillery( Lt. Baxter and his cannon & mortar crews)  After 2 turns of moment, and 1 close range canister shot, the 1st group of Natives valiantly charged the cannon crew.  After a bloody battle, the artillery crew and Baxter himself were slaughtered, but in the process, The Native group's morale broke and they retreated to the village.  Major Halkett, who had been hiding in a nearby field waiting for the wall to be breached, realized what was happening and ordered his troops out of the fields and opened fire on the  2nd unit of Natives.  they were too late to save Baxter, but 2 turns of fire routed the 2nd group of Indians back into the village. Halkett ordered his lieutenant, George Williams, to take command of the mortar team.  Williams proved to be a natural artillery commander. under his direction, the mortar did twice as much damage as it had in the first half of the game. 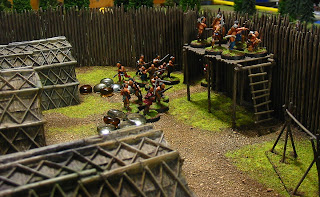 On the right of the Native village beleaguered Companies Franches de la Marine withered more fire, losing a further 4 marines on but a single turn!  Rogers, upon hearing indians hooting and hollaring in hte distance to his left, realized hehad left teh cannons unprotected and ordered his troops to move out and cover them.  Finally, Capitaine Celeron and Lt Pecaudy manged to fall back and reorganized their remaining troops into a single command.  When Hazen's rangers managed to catch up, they encounted not the haphazard attacking they had seen earlier, but a determined enemy.  In the renewed firefight, teh rangers too 2 casualties.  Lt Chadwick and his light infantry were still bumbling around in hte woods, trying to find the renewed french.


In the end, the French reinforcement commander decided to fall back in the face of a determined and capable British force, and leave the Indians and the small marine raiding party to their own devices.


We discovered a problem. The cannon rules are not sufficient for destroying walls.  I think the rules for artillery are really supposed to represent the fact that they are firing canister.What we did was use the cannon rules as is, and give the wall sections 8 HP(rolled 2D6). this clearly did not work, as it made it very hard to breach the wall. In the entire length of the game, the 2 cannons mid a total of 5 HP between 2 wall sections. I think in the future when firing cannons at fortifications, when rolling for effect,  i will make the cannons cause a hot on a 4+.  I think also, we will classify fortifications as light( log cabins  etc), medium(  palisades, light earthworks), and heavy( full fortifications major earthworks).  Light will get 1D6+1 HP ,  Medium 2D6 HP,  and Heavy 3D6 HP per  section.


This was the first test of the mortar rules. They seem fairly useful, especially in an assault like this one. I think one sensible modification would be to increase the deviation when you are attempting to shoot something you cannot see. I'd suggest doubling all the deviation ranges. I deliberately avoided shooting at anything I could not see in this game to avoid the issue. The unofficial mortar rules can be found in the files section of the TooFatLardies yahoo group or if you want to i can email them too you. contact me at crucible_orc (AT) hotmail (DOT) com
Posted by Stephen Thomson at 5:53 PM