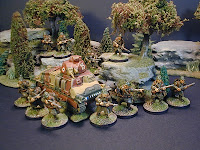 Lately Ive been feeling my FIW terrain, seen Here in the background, was lacking something. The collection was too dependent on trees. Just trees. Oodles of trees. then 2 weeks ago, Dave Hoyt of Much Ado About Nothing fame posted some pics of his WW2 early war French Collection.. One such picture was of some rock outcroppings he bought for his collection a few years ago.  When I saw these I immediately knew these would spruce up my FIW terrain.  Problem is I'm on a tight budge right now, and the original maker no longer makes them

Licukily I happen to know the guy who made these, ModelMakerChris.   Chris makes some of the most beautiful terrain you have ever seen.  most of my desert village collection was built by Chris.

Anyway, I know that these were something stacked, I just didn't know what he used. So I emailed chris on the off chance that he would let loose the secret of these pieces. Lucky for me he did: ceiling tiles.  Then, this weekend, Dave lent me one of his rock outcroppings.  Dave and I frequently game together at MIGS, so he knows he'll get it back in decent time, and good condition.

So this evening i went down to the MIGS clubhouse in Hamilton, Ontario.  MMIGS has 16 4x6 tables that are the perfect hieght for miniature gaming. They are also the perfect height for working on terrain while standing. Also, during the week nothing happens at MIGS, so it's the perfect place  to work on large-ish terrain projects that can be completed and cleaned up after in a week. 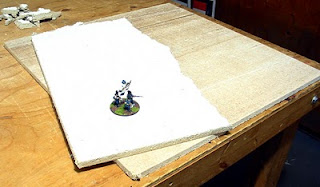 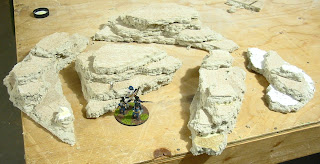 During construction( figures shown for scale
purposes are 3 of my 28mm Front rank
Bavarians, converted to Baden,  on a 60mm
round base) 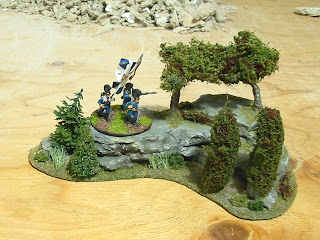 After. One of Dave Hoyt's ModelMakerChris' Finished
products used as a template for finishing

And as usual, with any project, I went a little overboard.  I decided I want at least one huge rocky outcropping for my FIW.  this one is 18 inches long, 8 inches at its widest, and 3.5 inches high.  it has 2 ways to climb it, at either end,  an alcove with an overhang, and a perfect position for ambushing fire. I'm going to build at least 1 more outcropping of similar size.


I've only used up about Half my materials, so there will be a lot of these floating around the club.


If anyone is ever in the Hamilton area and would like to come down for a game, or a terrain workshop, post a comment and let me know. I'm finding myself with a lot of spare time lately(obviously), and I'm always up for gaming etc. with new people.
Posted by Stephen Thomson at 9:01 PM