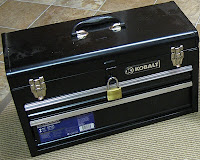 Earlier this month, i was finally converted to the ranks of using magnets for figure storage.  IT all started with my freind Dave Posting this article on his blog, HERE.  I had been looking for a viable storage option for my 28mm Eastern Renaissance Skirmish project.  2/3rds of  the Kobalt Storage case is perfect for my many  lance-armed cavalry. I won't go int any detail about the case, since Dave already did. 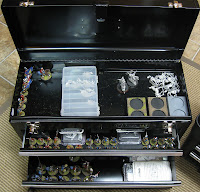 This Weekend, i started to realize that the GW foam i have for my French & Indian War figures was damaging the figures. Slowly but surely, the pressure placed on the bayonets was starting to take its toll. So I decided I needed to magnetize the entire collection. I set out trying to find a case suitable to hold the entire collection as it's planned to be.  THe Kobalt Case I use for my eastern renaissance has a great deal of wasted space, since the bottom draw is 4" high.  99% of my figures fit in the 2"tray. 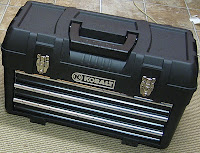 After a bit of searching the web, I found Kobalt made a similar case with 3x 2" deep trays at Lowes for $54.99.  I can fit my British, French, and Indians each into their own tray. The new case also has a  plastic body so despite being slightly larger, it's actually lighter. the drawback is the top section does not have a metal bottom. So I'll have to figure out some way of fixing a metal plate to it to hold the few miniatures I have that do not fit in the 3 metal trays.  But overall, it is a far more economical use of space. 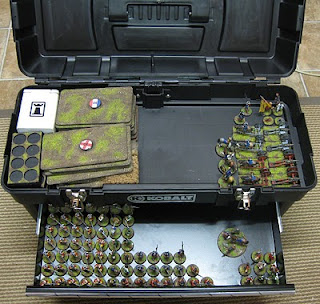 So far I have magnetized all my current British, and all my artillery for both sides. I found some surprisingly strong and thin magnetic sheets at the local dollar store.i can magnetize 54 25mm round bases for a dollar!
Posted by Stephen Thomson at 10:46 PM