This week I received more Old Glory Figures for my Sharp Practice FIW project.  I got 2 cannon teams for both armies, 1 bag of command for both armies, as well as a bag of limbers and a bag of coehorn mortars.  I was quite surprised with the quality. Most of the command figures and gun crews were very much above what I have come to expect from non-2nd edition OG figures.  I though the line infantry were on the good side for OG! One looker-on at the club thought some of the command were Front Rank for a moment.

Anyway. I got these on Tuesday. Since then I have painted 3 commanders(or big Men, as sharp Practice calls them) for each side, a standard bearer, a Drummer and 1 gun team each. and to top it off, I painted My Indian village on Wednesday and made 8 more blinds on Thursday..  A pretty good week all in all.

So tonight, while I was at MIGS(gaming club in Hamilton Ontario) I took the opportunity to take a few pics of my collection.

So far my British army  has 3 groups of line Infantry and 1 group of grenadiers(all of the 44th Foot) 1 group of light Infantry,  1 group of Virginia militia, 2 groups of Colonial rangers, and 1  cannon & crew.  It also includes 8 Big men, among which is George Washington and his dogs. 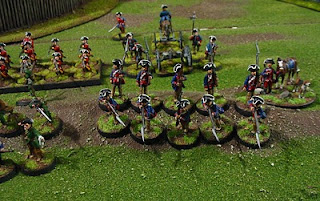 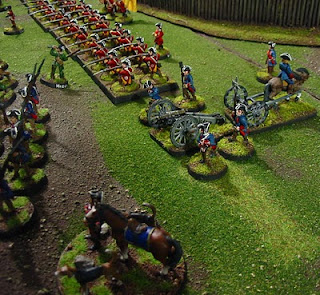 My french Army Consists of  3 units of line & 1 unit of grenadiers(all of the Languedoc Infanterie), 2 unit of  Companies Franches de la Marine, & 1 cannon & crew. I also have 20 Indians to accompany them. I have  6 French big men and 2 Indian big men to lead them. 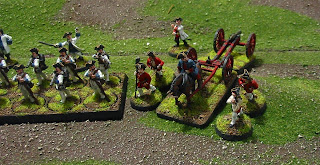 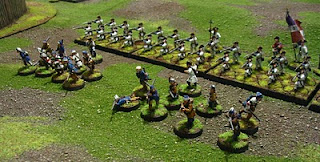 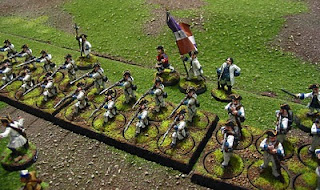 Old Glory Infantry & command.
The big man right of the Standard is from the
Blue Moon Duelists set. 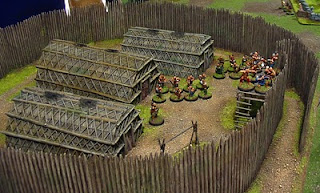 Perry Miniatures Indians  in the Village 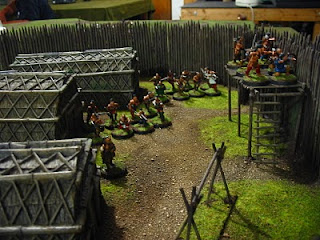 In Sharp Practice, you usually start with 'Blinds' on the table instead of units. it is a simple and great way to generation the fog of war. here's a picture of the blinds  i have for my British army. I have another 10 for the french as well.
I have another cannon  team for each army, a pair of coehorn mortars,  and another unit of light infantry for the British. I plan on buying 5 packs of Conquest Indians and 3 packs of Companies franches de la marine for my French/Indians, and 2 more groups of 8 Virginia militia plus some  militia command.
Eventually I'm looking at doubling my line infantry contingent for both armies, and adding some Courier de bois.Canadian militia as well.
Posted by Stephen Thomson at 11:31 PM