In February, if you had told me I'd own and be painting a Renaissance polish army, I'd have thought you were nuts. In fact i only got into the period because of my friend, Jonathan Holmes.

Back in the first week of march, I introduced him to Sharp Practice(by TooFatLardies). He was immediately enamored with the rules. He saw in them the potential to final game Zaporosian Cossacks in an enjoyable skirmish game. I've known Jon for a little over half his life,he has been obsessed with Cossacks, Being a direct descendent of that region of the Ukraine himself. but he has never been able to find a skirmish set of rules that he liked.


So i set about helping him locate some good and/or cheap figures. In the process I happened to stumble upon The Assault Group Website, and their beautiful Eastern renaissance range. I immediately decided i would be forced to buy some polish to fight Jon's cossacks. Lucky for me, I discovered at a Local convention that North Bay Games and Hobbies still had some TAG polish on clearance for $12.00 CDN. 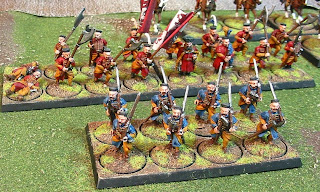 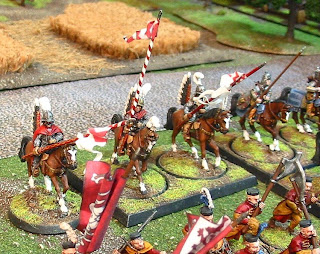 I have put this project on Hold while i teach my friend Jon how to paint like I do (IE fast) Once he has caught up a bit i will continue to paint. I have another 27 Winged hussars, 9 Pancerni, 12 Reiters, 8 Guard Haiduks, 24 regular haiduks, and 24 more German style musketeers to paint.
Posted by Stephen Thomson at 9:48 AM